Almost 2 years after the Gezi demonstrations the political meaning and symbolism surrounding Gezi is still an object of interest and study in and outside of Turkey. On 4-5 May, 2015, the Nordic network MICS (for studies on Migration, Identity, Communication, and Security) held its third workshop in a series of four. This time the focus was on communication, new media and the 2013 Gezi protests in Istanbul. During the two-day workshop we discussed such issues as: What did Gezi mean? How much did it influence Turkish politics? Was it expected? What is the effect of new media and communication today? And what is the true depth of this type of mass communication and mass mobilization?

The workshop participants consisted of experienced researchers and young scholars from a wide range of disciplines. Thanks to the variety of interests and expertise, the Gezi phenomenon was approached from a number of different angles. Many presentations touched upon political strategies and the rhetoric developed by not only the government but also the protestors, the effects of which were polarization and alienation on both sides.

The workshop participants looked at the political and historical discourse of Turkey and the region in order to find answers to the question as to how such a large and heterogeneous mass of people could gather and become visible in the quest for one common and diffuse goal and what the significance of the Gezi protests really was. One crucial aspect in this regard was the claim and reclaim on public space online as well as offline. The right to use public space such as streets and the Internet has been considerably limited by the Turkish government since the Gezi protests. 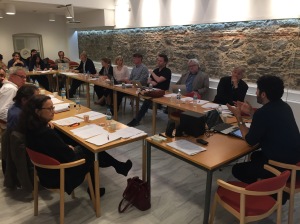 See http://www.micsnetwork.org/ for more information about this workshop and other activities within the MICS Network.