When the Mongols created the first truly Eurasian empire back in the thirteenth and fourteenth centuries, with the rise of Pax Mongolica, for the first time trade could be carried out over a very large Eurasian territory without too many obstacles. The Mongols are the first example of connections over Eurasia enabled by a government that allows for the beginning of a global economy, continued and enforced by successor great powers in the Eurasian sphere, such as the Russian and Ottoman empires. China’s historical and present-day trade routes over Eurasia and the Indian Ocean as well as India’s age-old participation in overland and maritime trade are as important.

This conference will venture to look at the land and maritime crossroads of the Silk Roads that became routes of mobility and migration providing means for religious, cultural and ethnic interrelations in a global historical process which remained as a significant legacy in the pre-modern and modern period. The aim is to scrutinize continuities with the past that may enable the present.

The forerunners of the conference have been the Central Eurasia Discourse Discussion Forum, with contributions that can still be read on this blog, and a series of seminars under the title of “Imperial Legacies along Former Silk Routes in Eurasia and the Indian Ocean” announced in previous posts on this blog.

I want to thank all who have participated in this thought-provoking exchange of ideas and I hope to see as many of you as possible at our “Grande Finale” on 28-30 April at Boğaziçi University and Swedish Research Institute in Istanbul. The Conference Program is available here. 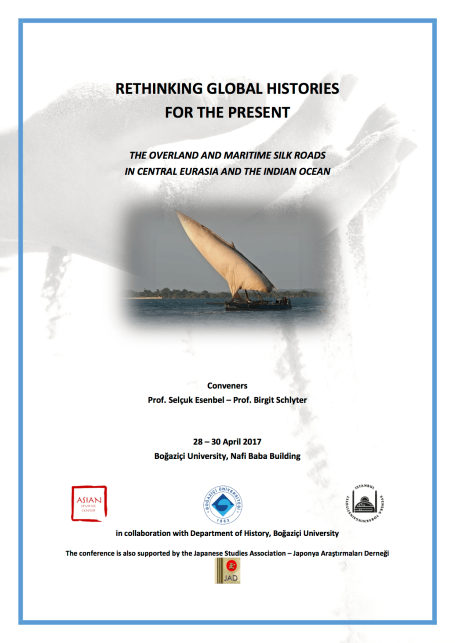